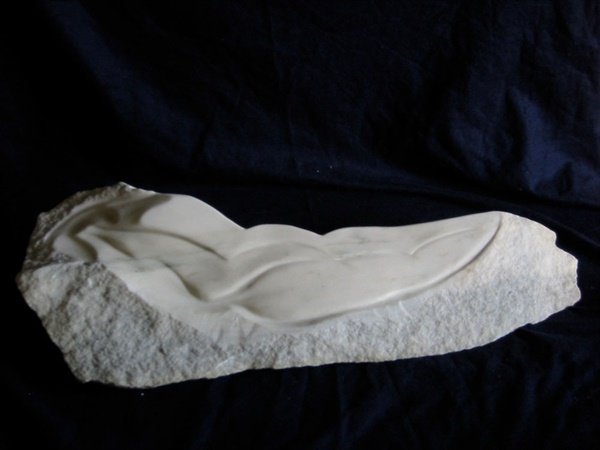 Melanie Zibit was interested to hear an interesting perspective from a Roxbury Latin student during a showing of Zibit’s work in 2002. “The student asked me, ‘Have you noticed that your pieces are really two forms talking to each other?’” said Zibit, reflecting on the event. Zibit’s piece, “Odalesque,” which uses dual elements, was selected by the New England Sculptors Association (NESA) to be featured at an exhibition at Bridgewater State University. The exhibit is on display through March 22, 2013 at Bridgewater State University’s Maxwell Library.

Zibit’s art usually encompasses two separate elements interacting with each other. Her bronze piece “Inner Conversation” uses two abstract pieces that seem to have the back-and-forth of a conversation. Another piece of a reclining nude portrays a set of women’s legs leading up to her buttocks. However, viewed from another angle, the piece appears as if it is a long, hollow shell. Zibit, a self-described three-dimensional thinker, explains the duality of her pieces is a way to portray a relationship between two parts. Her abstracts are meant for the viewer to circle around and view from several different angles. With each new angle, she hopes the person viewing her art sees a new and exciting piece. “It’s a lot like in life, in the way of communicating and living with someone else,” Zibit said. “It’s that way with forms. How do they talk to one another? It adds a lot of energy, but it also adds a complexity.”

While Zibit said she has learned to define her style, she is not opposed to continue learning about herself through her art. For example, she said the comments from the Roxbury Latin student were a learning experience for her. “It opened up a different perspective for me to view and understand my sculpture,” Zibit said. “I’m more conscious of it.”

Zibit said she became interested in sculpting after she transferred to Brandeis College in the late 1960s. After she graduated in 1970, she made her first trips to Italy, where she watched a blacksmith hand carve the sculpting tools that she still uses today. “I use an air hammer, which is more controlled and looks like a large dentist drill,” Zibit said. “But I still use hand tools for the more detailed parts of my pieces.” And detail is key, especially when working with stone. She explains that when working with clay she has the freedom to keep changing her vision through an additive process. But with stone, one wrong move changes everything.

Jay Block, the curator at Bridgewater State University who selected “Odalesque,” said Zibit is a rare example of an artist who excels at both the abstract and physical execution of her work. “Many artist have great ideas and can’t make them into a physical manifestation. Some have beautiful form but don’t have a clue what they are doing,” Block said. “Her work isn’t a mistake. It’s very well done on the conceptual and technical level.” Block said the smooth, round edges of Zibit’s work convey a sensuous nature. He compares her style to that of cave art for its realistic but not overbearing interpretation of the human body. “Cave art is painted and sculpted, and the motion is augmented to have the same level of sophistication as the human form. But it does it with a minimum line and information,” Block said. “Melanie’s work is the same way. It’s not a real hit, but it conveys a body in motion.” Zibit also described her work as sensuous, to an almost erotic sense. “My kids had a hard time growing up with the art,” Zibit said with a laugh. But she said her work needs to have those elements to have the important message she hopes to convey. “The human form helps us connect with who we are,” Zibit said. “There is something very powerful about a life that is related to sensuousness.”